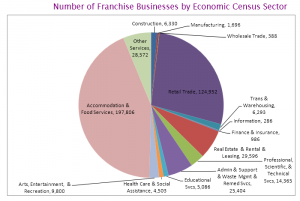 The importance of the American Franchise system cannot be overemphasized. Since the 1840s, when German brewers granted rights to taverns to craft their beer, the system made its way across the pond to gradually become the major force in American business that it is today.

Isaac Singer, who improved the sewing machine in the mid-1800s, is considered one of the first, if not the first, American franchisor. Now, the business models attract every type of individual seeking his/her slice of the enticing American Dream of business ownership. In franchising’s case, this is a tried and true business formula.

There is a reason that franchising remains so popular among such a diverse segment of entrepreneurs. The formula is successful. Because, let’s face it, it’s tough to make a go of a business. With a franchise, however, you are in business for yourself but not by yourself. And that’s what creates the dynamics in these statistics.

When considering a business opportunity, make sure you look at the power of a franchise. If you join one, you will be part of one of America’s great economic engines.